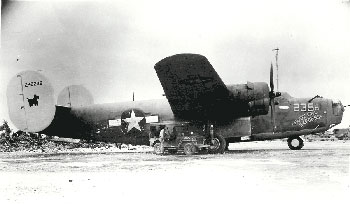 307th Bombardment Group (H) B-24 from the 372nd squadron (notice the Scotty dog on the tail) is prepared for a mission. The plane was named Hoot Owl Express and was plane #240235.

"The men of this Group have nursed every ounce of energy out of her. We have taken her on the longest formation flights of the war. We have taken her through thick ack-ack, and with her we have thumbed our noses at the Nip Air Force and have rid the air of a goodly number of Jap planes. With her, we have taken on the Jap Navy, and slugged the hell out of it. With her, we have pock-marked acre after acre of Japanese real estate, and destroyed village after village, town after town, and have driven the Jap away from his cities. The B-24 has been our weapon – our “rifle” – our fighting tool.

The Liberator has, without seeming to, ruled our lives for three years. Indirectly, we have been the slaves of the Flying Boxcar. She has been the taskmaster, determining when we got to work, and when we quit. She can get you up in the middle of the night, or early in the morning, keep you working away, or she can let you hit your sack. Loving her, cursing her, berating her, and again praying for her, you become her duty-bound slave.

Human-like, the B-24 is rugged and yet sensitive, crude looking and yet beautiful, clumsy, and yet clean-lined. She is at all times temperamental. No two B-24’s are alike. For weeks she can be gay and healthy, the engines sing and zoom, then, without warning, she can become unruly, her instruments register wrong, her controls become sluggish, her engines spit oil. One plane can hungrily lap up gas, another sips it lady-like, another can tear away and fly faster than her sisters, while still another can only snail along. One plane is wing weighted, another is tail heavy. A B-24 has her moods. She needs attention; at times the attention of a squawking baby, at others she gaily bounces along, cat-purring with contentment."