CLICK HERE TO VISIT THE FREE FOLD3 COLLECTION OF 307TH BG RECORDS AND PHOTOS – YOU WILL NEED TO REGISTER WITH A LOGIN AND PASSWORD BUT THESE RECORDS ARE FREE.

The following is a list of 307th Bomb Group (H) History topics. Please select from the listing below, visit the topic pages and then navigate back to this index to select another topic.

The 307th Bombardment Group (Heavy) was activated in 1942 by the Army Air Corps Combat Command after an attack on Pearl Harbor thrust the United States into war with Japan. In succeeding years, the 307th’s participation in World War II, the Korean Conflict, and the Vietnam Conflict proved it to be one of the most renowned bombing units in military annals.

On April 15, 1942, the 307th began operations as a B-17 Flying Fortress bomber unit at Geiger Field, Washington. Its first mission to guard the northwestern United States and Alaskan coasts against armed invasion prepared the group for its later role in the Pacific Theater of World War II. After patrolling the coastline of America for five months, the 307th’s B-17s were replaced with the famous B-24 “Liberators.” Subsequently, the entire unit was transferred to Sioux City, Iowa, for a brief training period. After completing a three-week familiarization program, the 307th relocated its entire cadre and 35 bombers to Hamilton Field, California.

Three days later, the B-24s were deployed to Oahu in the Hawaiian Islands. An old Norwegian freighter slowly transported the remainder of the group to its “Pacific Paradise.” Upon arrival at Oahu, each of the group’s four squadrons was assigned to different Hawaiian locations; the 370th to Kipapa, the 371st to Wheeler Field, the 372nd to Kabuka, and the 424th to Mokaleia. Headquarters for the 307th was centered at Hickam Field. Finally settled at Oahu, 307th bombers began to search and patrol missions over the surrounding Pacific area. Maintaining a 24-hour vigil, the bombers were to avert any naval attack against the Hawaiian Islands. Stations were eventually set up on Espiritu Santo, New Hebrides, on Jan 13, 1943; Guadalcanal, Solomon Islands, on Aug 20, 1943; Los Negros, Admiralty Islands, on Jun 1, 1944; Wake Island on Sep 3, 1944; Morotai, New Guinea on Oct 17, 1944, and Clark Field, Luzon, the Philippines on Aug 27, 1945.

Group bombers received their first taste of combat on December 27, 1942. Twenty-seven of the group’s aircraft were deployed from Oahu to Midway Island. From here, the B-24s staged their first attack against an enemy fortress on Wake Island. The enemy was taken by surprise during the predawn raid. Before Japanese units responded with a barrage of anti-aircraft fire, 307th bombers had blasted 90 percent of the Wake stronghold. All aircraft returned safely from what was considered the longest mass raid of that time. It was from this and succeeding long-distance combat missions that the 307th Bombardment Group became known as the “Long Rangers.” 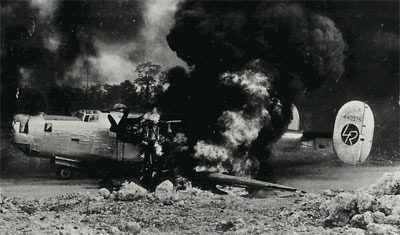 A 307th Bombardment Group B-24 burns on the runway after returning from a damaged mission.

The 307th moved to Guadalcanal in February 1943. From their new location on the largest of the Solomon Islands, Group bombers attacked fortified Japanese airfields and shipping installations within the Southwest Pacific. At Guadalcanal, the 307th Bombardment Group was subjected to massive air attacks by enemy bombers and fighter aircraft. On a warm day in March 1943, three waves of Japanese planes blasted the airfield, causing the greatest number of 307th casualties during the war.

November 11, 1943, the 307th participated in the largest aerial strike of the South Pacific War. In conjunction with the United States naval elements, group bombers pounded enemy war and merchant ships at Rabaul, New Guinea. Amidst swarms of Japanese “Zeros” and heavy anti-aircraft fire, 307th aircraft released their bombs, leaving the port of Rabaul in complete ruin.

Throughout the remainder of the war, the 307th aircraft continued to cripple the debilitated enemy. Group elements neutralized Japanese forces at Yap, Truk, Palau, Balikapan, and the Philippines. Bombing strikes against Japanese shipping centers in the Philippines inhibited the enemy from gaining a further stronghold in the area. An unescorted attack by group aircraft against oil refineries at Balikpapan, Borneo, on October 3, 1944, helped assure an allied victory in the South Pacific.

Following V-J Day, 1945, the 307th aircraft ferried former American war prisoners from Okinawa to Manila. No longer needed, the group returned to the states in December 1945 and was subsequently deactivated. With barely time to form cobwebs, the 307th Bombardment Group was reactivated on August 4, 1946, and is still active today.

Source of “Did you know?” material contributed by the Lincoln AFB web site.

The following 307th BG historical documents are in a PDF file format.